It's May and I need to replace the Christmas scene! Ya think? Even though I haven't commented on blogs recently (and I do feel guilty about that) I've been checking in. When I first started blogging, I thought I'd post a scene once a week, and when that wasn't realistic, I thought every two weeks, then I thought once a month, then I thought every two months.....Sometimes I'm just not in the mood to create, I'd rather think about it. I've been working on the big blue dollhouse I bought, which is now tan.  I've been making tiny little things for the house and I'm not concentrating on any one room, therefore, there aren't any completed rooms yet.

In the meantime, I thought I'd do a scene featuring a table setting that I bought on EBay two years ago. There's a little Chinese, Japanese, and Taiwanese goin' on here.  I call it...blending. 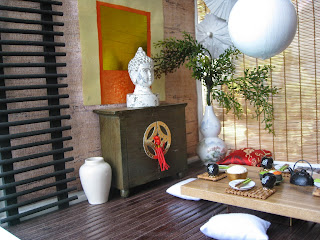 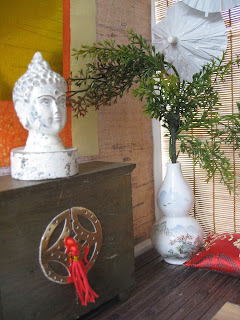 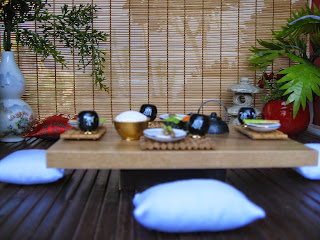 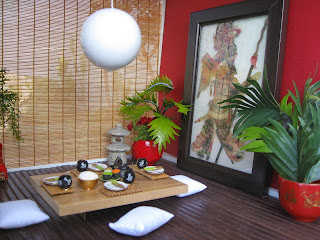 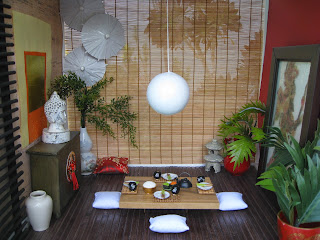 The stuff:  The only thing worth mentioning are the items I bought on Ebay (placemats, chopsticks, cups and sushi).  Everything else is basically from the thrift shop (framed art, vases, umbrellas, red pillow,and "lantern". The rest of the stuff is thrown together.

Well, that's it for now.  Meanwhile, I'll continue to work on the house. I'll get back to you before Christmas! :) Just kidding!

A Little Something About Me

Minis-B-Happenin'
I live in Southern California in a charming little college town near Los Angeles. I've always enjoyed crafting, decorating, designing, sewing, and repurposing found items. I love all interiors, so I'll be mixin' it up, but you'll definately see some bling, animal prints, orange (yea, lots of orange), and global inspirations. I've always had a fascination with miniatures and with this new hobby, I'm having too much fun! I hope you'll come back often. --Beany